As EPCOT (or EPCOT Center, as it used to be known) reaches its 35th birthday today, the GeekMoms have been reminiscing about our favorite memories of one of the world’s most unique theme parks and the things we love about it. Below, some of us share our thoughts about what makes this place so special to each of us.

I first visited EPCOT in 2004 during my very first trip to Walt Disney World, and it instantly became my favorite of the four Disney Parks–well, maybe joint first with the Magic Kingdom. During that trip, I was inducted into a special club. No, not Club 33, unfortunately, but the Sombrero Club. You see, ever since my husband’s family started visiting Disney World, they had taken a photo of their vacation group in EPCOT’s Mexico pavilion, each wearing a sombrero. These photos stretched back to 1988 and, over the years, had become a timeline of change. Different people joined the groups and left. Children grew and became adults. In the very first Sombrero Club photograph, my husband was only 14 years old. The most recent one shows him stood beside our son, then aged five. There are Sombrero Club photos of my nieces and nephews, one taken on my honeymoon, ones including friends who came with us one particular year. What started out as a fun family picture has grown into something we can look at and see the changes in our family, even as the scene behind us remains almost identical through the years. It’s something that has become a must-do on every trip into EPCOT, and something I hope will be passed down to future generations.

Our first time at Disney World, it was the early ’80s. There was only The Magic Kingdom, but my sister remembers that they were building E.P.C.O.T. (with the periods) at the time. Fast forward to 2006 and, now with two kids in tow, we finally made it back to the Disney World resort. By this time, there were four main parks, plus sprawling resort hotels and the like. I had planned on eight days in the parks, most of which we spent in The Magic Kingdom and EPCOT (now without periods). Though I craved moving walkways, since it was Florida in August, EPCOT pretty much embodied much of my personality. Its two halves, one focusing on science and the future and the other one on travel and culture, combined to create a strange whole that just made me happy. We jumped from science thing to science thing, and then did the whole round of the World Showcase. I especially loved how they took great care to design the country areas authentically, with the Best Food Ever (TM) and shops that made you feel like you were actually in the country. I may have gone a little wild in the Japanese store. I am dying to go back with Rory and the kids so we can experience it all together, with the kids actually remembering stuff this time, since they were five and two when we went. But this time, it won’t be in August.

My first trip was in summer 1988 (like Sophie’s husband’s family’s first sombrero photo!) I was a strolling violinist in a group through my school system and someone had donated a LOT of money for our group to perform through the Magic Music Days program. While most of what visitors see with Magic Music Days are on the order of marching bands down Main Street and choral performances, ours was unique in that we were put in the Odyssey Restaurant in EPCOT to stroll through a lunch seating. For our group, well, this was what we did, so it wasn’t too difficult, but it was definitely magical to do it at Disney World! One of the things I remembered about this experience was getting to use one of the cast dressing rooms that apparently was also used for the Disney characters because there were posters with tips on how Mickey and Minnie Mouse should act when interacting with park guests. 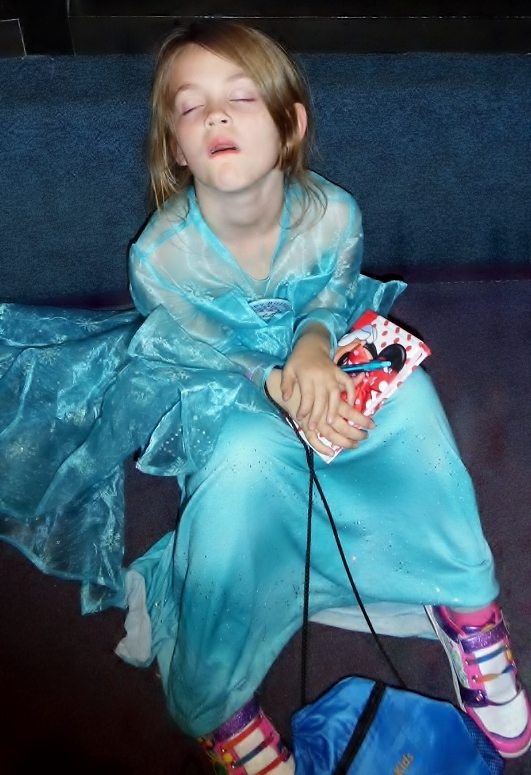 My high school marching band did Magic Music Days at EPCOT, too, Patricia! But my best memory of that was later that evening, sitting by the lake in the dusk eating ice cream with my bandmates as we waited for the light show. That was also the trip where, at that same sombrero shop in Mexico, my friends convinced me to buy a straw sunhat (smaller than a proper sombrero though!) with a Minnie bow, that kind of became my signature after that and I’ve been partial to wide-brimmed sunhats ever since.

That was my middle visit to EPCOT: my first was in 1986, and I’m surprised there weren’t any other trips in the middle, because my parents had bought a record album of EPCOT music that we listened to all the time after that, which probably helped cement my EPCOT memories and made them seem bigger. I was disappointed, when I dragged my high school friends to the food show in The Land Pavillion years later, that the produce no longer sang the “Veggie Veggie Fruit Fruit” song. Also, random songs from that album still pop into my head at odd moments today.

Last year we were there on my princess-loving daughter’s 7th birthday, which seemed too well-timed not to splurge on the Princess Lunch in Norway: expensive, but so tasty! I’m not sure she was quite as into it as she could have been, though, because it turned out she was coming down with strep throat and kept falling asleep in lines the rest of the day. But my absolute favorite EPCOT memory has nothing to do with Disney-magic. Later that week, as my 9-year-old son and I stood in a line in a shop in Japan waiting for a candy sample, a worker in the next room spilled a box of hairpins on the floor. My son, who usually doesn’t even clean up his own spills, impulsively jumped out of line and into the room to help her pick them up. I was so proud of that burst of kindness.OH, it was in EPCOT where I first met Mickey, too! Near MY birthday! And he wrote happy birthday to me in my autograph book!

Oh, it was in EPCOT where I first met Mickey, too! Near MY birthday! And he wrote happy birthday to me in my autograph book! 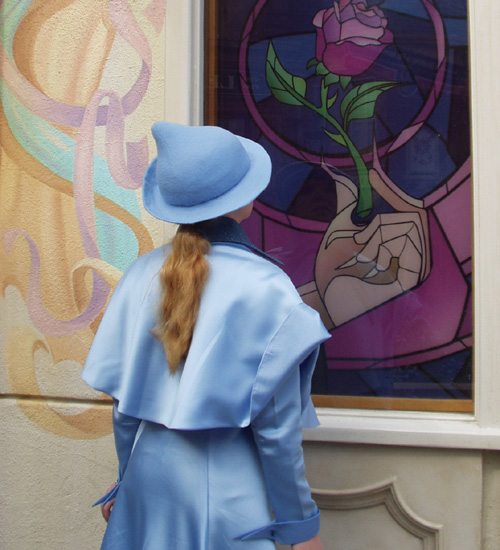 I was six and I don’t remember anything except getting in trouble for not finishing my dinner in “Germany.” (I was six! It was weird!)

I was thirteen and my mother had died a few months before. I remember waiting in line to meet Space Mickey and Minnie with my five-year-old brother.

I was seventeen and I’d just graduated high school. My best friend and I had lunch with Chip and Dale at The Land as part of a trip to Disney our parents sent us on, my first “adult” vacation (lol).

I was twenty-two and my father had died a few months before, so we went to Disney World as what I now see as a traditional celebration of life and family. My daughter was not even a year old and later said it doesn’t count as a trip to Disney if she remembers nothing and couldn’t walk.

I was thirty and I dressed as Fleur Delacour to have a photoshoot in “France.” That is probably my favorite memory of EPCOT.

I was almost thirty-six, almost one year older than my mother was when she died, and we went to Disney for my birthday. It was late December and freezing. Edward James Olmos narrated the Candlelight Processional.

I was forty and we only had two days at Disney World so we missed EPCOT. But the first night we were there, we took the monorail to the park so we could see the geosphere all lit up and it brought tears to my eyes. We’ll go again soon. (I’ve been saving since we left!) 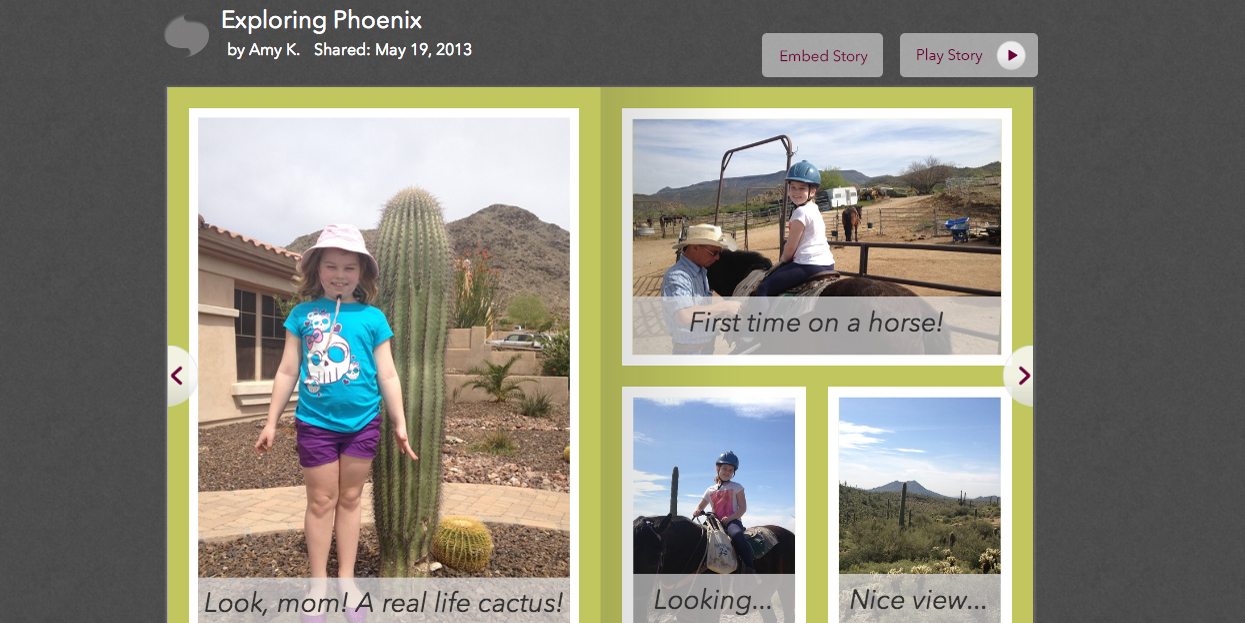 Storytelling With the Disney Story App