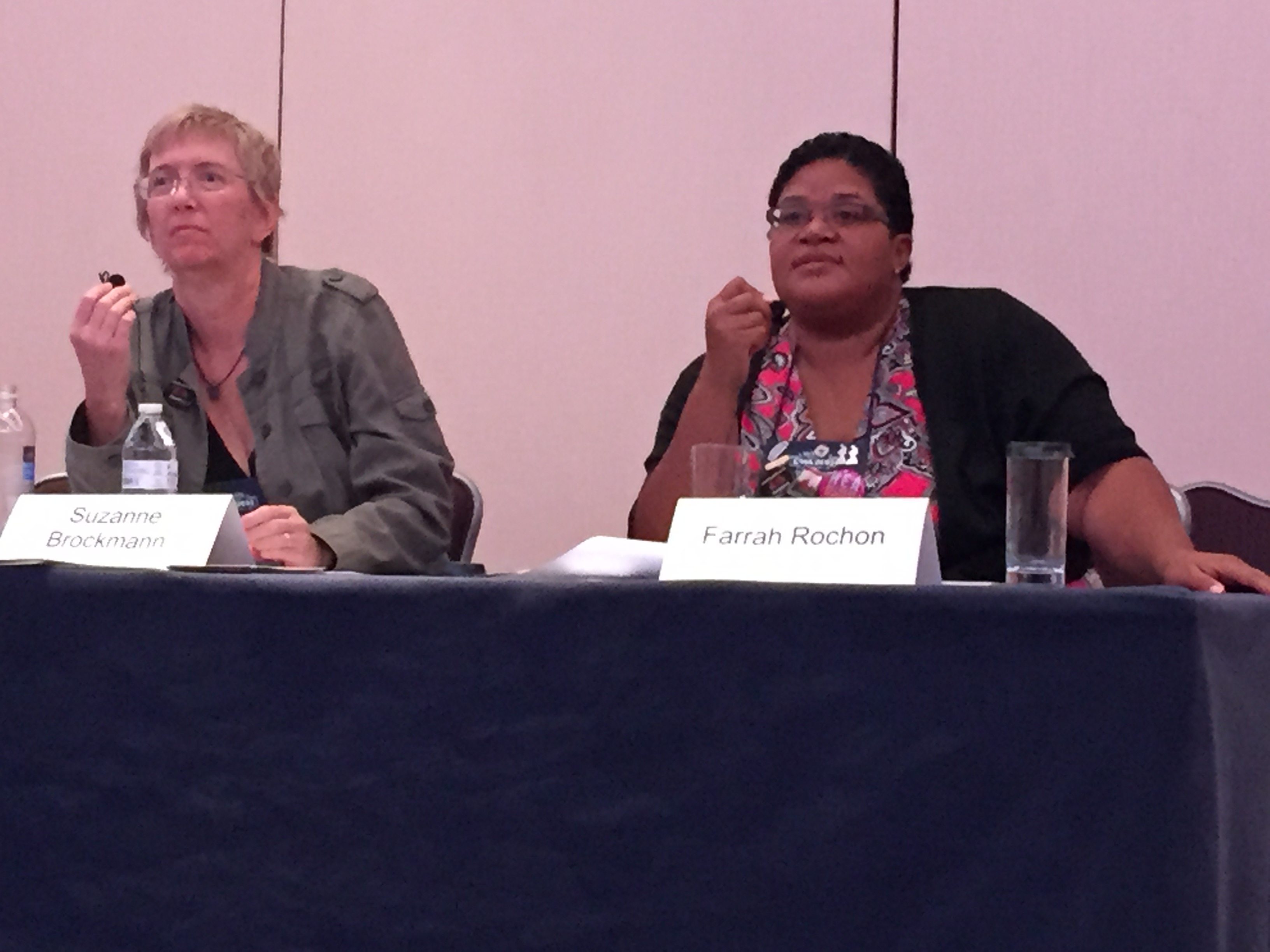 As I sat last month in a darkened ballroom with approximately 2,000 other writers, the vast majority of them women, watching the Romance Writers of America present their two highest awards, the Rita and the Golden Heart, I marveled at the road that had brought me to that ballroom. Romance writing had been the last thing on my mind when I started a writing career. I’m a self-professed geek. I grew up as a tomboy. I read science fiction and fantasy books and comics, not romance.

So what was I doing with romance writers?

We on the internet often talk of female space spaces, organizations dedicated to helping women, and places where women can shine and be not only supported but celebrated by other women.

That’s exactly what RWA, which boasts approximately 10,000 members, is about. It’s a uniquely supportive organization among other professional writing organizations because RWA allows, no, encourages, the participation of unpublished writers. And with RWA, I’d found my tribe. I wasn’t alone. The acceptance speeches by the award winners were truly words of acceptance from women of high accomplishment even before they became writers.

For example:
A graduate of West Point, former Army officer Caro Carson won a Rita for Contemporary Romance: Short for her novella, A Texas Rescue Christmas. (See her acceptance speech at 11:00 in the video.)

Anna Richland, also a military veteran, won a Rita for a military story, His Road Home, the story of a severely wounded Special Forces medic, and dedicated the book to a mother she’d met at a veteran’s event, a mother whose son didn’t come home. Her speech had everyone in the audience in sympathy for the mother who lost her Marine. I only hope that somehow, that mother knows her son’s story is not forgotten. (That’s 1:19:10 in the video and you will need tissues.)

Tessa Dare, the winner for a historical romance that included a cast of early LARPers, told the crowd that she’d begun to doubt herself but had been buoyed by the belief of others in her writing. And, she said, if there was anyone sitting in the audience who doubted themselves and had no one to believe in them, to email her and she would be the one to believe in them. (Go to 32:15 for her full acceptance speech.)

Several of the winners of the Golden Heart Awards called out to their fellow nominees. This is unique for two reasons. First, the Golden Heart is given out for unpublished manuscripts. These are beginners in their careers. Yet the Golden Heart winners are feted as much as the Rita winners. Second, in a world that often seems so competitive, the Golden Heart nominees had banded together so they could have a collective experience, and dubbed themselves the Dragonflies. The Dragonflies received numerous shout-outs in acceptance speeches.

This banding together of nominees isn’t unique. Past groups include the Wet Noodle Posse and the Ruby-Slippered Sisterhood. Those groups are still growing strong, still supporting each other.

Romance is a $1.08 billion dollar industry, larger than mystery or science fiction/fantasy. In today’s economy, romance is the surest bet for publishers. And yet the attitude of those who write romance isn’t one of competition, at least not collectively. Instead, it’s “a rising tide floats all boats” and “pay it forward,” as writers who were helped by those ahead of them turn around and help the new writers in turn.

The organization and the romance publication industry has much work to do to reflect our current society. Harlequin, which has separate lines for suspense, sweet stories, contemporaries, and historical romance subgenres, unfortunately puts all stories with black leads into one line, Kimani. This is appalling segregation and needs to end now.

RWA itself would do well to reach out to authors of color to bring more into the fold. For more, read this story of a live tweet session on a diversity panel at RWA.

There is also the revolution in digital publishing. RWA as an organization has had to sometimes be pulled, reluctantly, into this brave new world. As ebook sales exploded, largely pioneered by romance writers and readers, RWA lagged behind in recognition of authors who were leading this charge. But now the national conference is filled with successful self-published (indie) authors teaching others how to do what they do.

RWA also has had a long debate about the role of non-romance writing members. Those writers who don’t write romance are welcome to join RWA but due to new rules, they cannot vote in elections or serve on individual chapter boards. As a member, I feel this new rule lacks foresight, in that romance writers can often benefit from a more expansive point of view. Despite this, whenever anyone asks for advice about how to learn to write, I tell them “join RWA.” Writing information is available in person at many vibrant local chapters and busy online chapters. Many of those local chapters allow visitors to attend one or two meetings for free.

I’m moving back to my geeky roots in SF/F and working on an urban fantasy. But I will remain a member of RWA. I still have a great deal to learn about craft and the publishing industry, and I still need to pay it forward, to pay back the support that was given to me.

Because, like everyone else in that audience in late July, listening to the acceptance speeches, I belonged. We need more of these thriving, supporting female communities.

RWA offers a model of how to do it right.

3 thoughts on “Romance Writers: A Safe Space For Women”