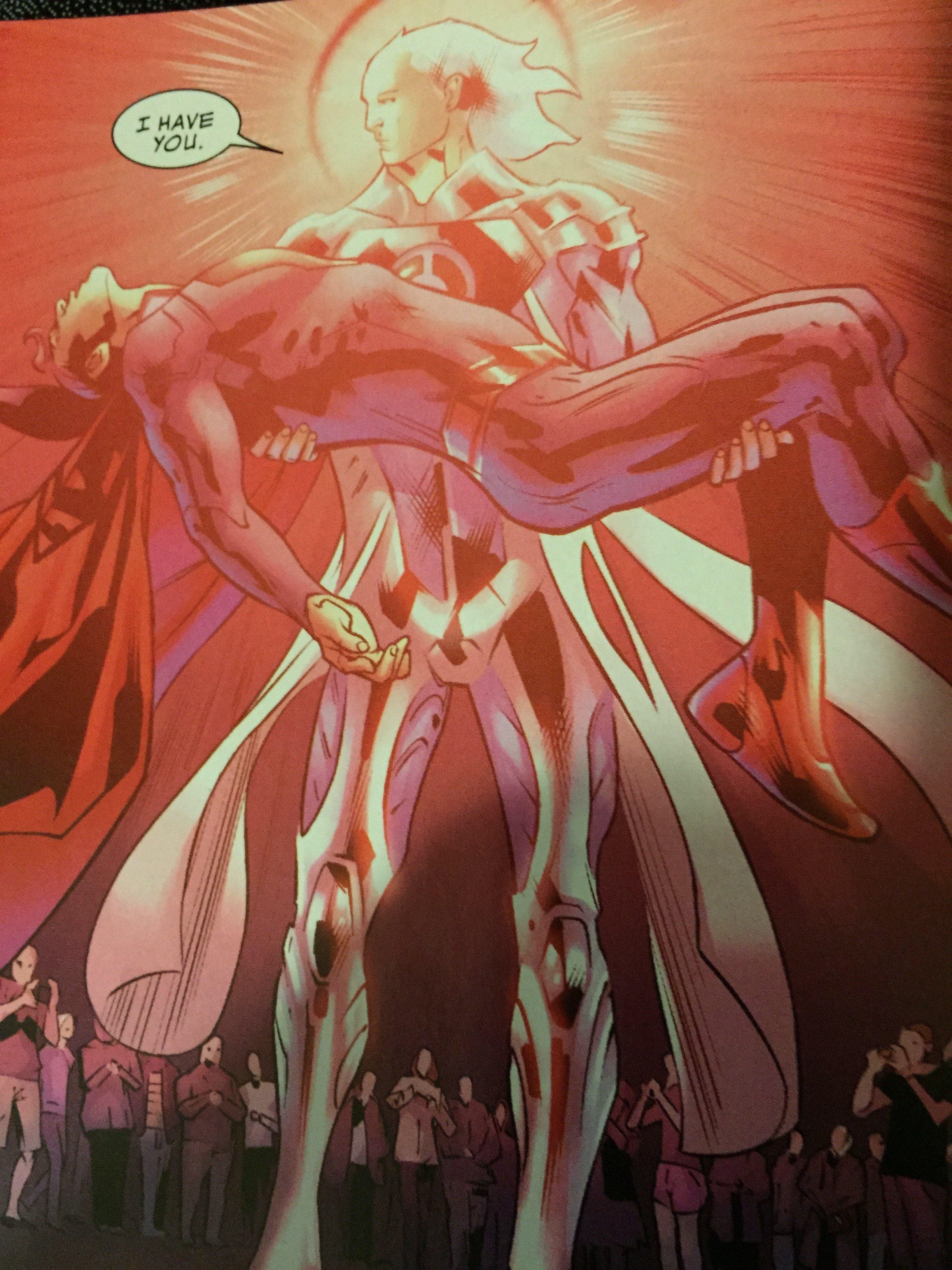 Each week, I check the new releases from DC Comics, so you won’t have to guess which to grab at the shop or on Comixology on Wednesday.

This week sees the return of Justice League United under a new creative team, a moody and heartfelt Gotham Academy, the appearance of a Kryptonian God, fun from Starfire, and an unexpected appearance from the Spoiler in Catwoman.

Oh, and that’s a heck of a last panel in Batman.

“Superheavy, Part Two,” continues the tale of Jim Gordon inside the robot/armored Batman suit and it’s been a rocky start. Well, for Jim, at least. For the reader, it’s been a great deal of fun to see Jim find his way into the role. He’s a Batman with a dark sense of humor and uncertain that he’s the hero Gotham needs. The one panel where he makes use of the Bat truck deserves a round of applause for the art team, and Snyder’s dialogue, particularly in scenes between Jim and new police commissioner Maggie Sawyer, had my eldest son saying “hey, I should start reading this.” For long time readers, the last page cliffhanger answers an age-old question.

This series started with a splash, as a Canadian-based team that reintroduced Adam Strange to the DC universe and gave his lady love Alanna her own story and her own set of powers. Now that the original creators have left, the book has been shifted from a space-faring, time-lost team to something more metaphysical. Alanna and Equinox are in charge of gathering temporary strike team members to fight “deadly anomalies that fracture physics itself.” The team includes Equinox, Animal Man, Stargirl, Mera of Atlantis, Swamp Thing, Poison Ivy and the Demon Etrigan. It’s a odd book narrated by a disembodied Adam Strange but it’s also fascinating and well worth reading.

The cynical, chain-smoking, mistake-prone Constantine is back and trying to solve the problem of someone destroying the ghosts that surround him in his usual way, which unfortunately has bad consequences for him and for one of his ghost buddies. There’s a terrific sequence as John walks into the “Thin Places,” where the borders between supernatural and the real world overlap. The art sells this part, with the ghosts, evil memories, and demons all lurking just at the edge of the senses. If you’re missing the television show, this book will help soothe the cancellation pain.

The first issue was intriguing and the second part of this reads like something from the Grant Morrison-era JLA. In other words, it’s epic and unusual. The team members wonder what to do when a god shows up. Superman seems to support him unequivocally. Meantime, Batman tries to find the mastermind behind the JLA’s ambush, and he prepares, if necessary, to fight a god. “There’s always an angle, always an agenda. Just need to know what it is.” We know this won’t turn out that well for Rao, given the previous warnings, but he makes an intriguing villain and a nice change from the usual suspects.

If you read all of Starfire’s dialogue with the voice of the animated Starfire from Teen Titans in your head, this issue is even more fun. Koriand’r fights a hurricane, rescues a bird, several sailors, and has to handle someone who thinks she’s a spice rather than a superhero. This is now my favorite of the Conner/Palmiotti titles, though Harley Quinn and Harley Quinn & Power Girl are also good. But Starfire has less darkness and more puns.

After last month’s guest appearance by Damian Wayne, the focus shifts back to Olive Silverlock, who’s mourning her mother, avoiding the love of her life, and trying to help a friend who’s worried he’s becoming a monster. Olive is too, as the family curse that killed her mother might be her legacy. The art is moody when needed, in the halls of the academy and in the cemetery, and poignant when needed, as Olive finally confesses her fears to Kyle. As I’ve said, this is the series to give tweens to hook them on the Batman universe.

Selina Kyle wants to clean up Gotham from inside the mob but this issue seems to hint that it’s all about to fall apart, as her quest to find out if Bruce Wayne is really, most sincerely dead conflicts with her need to control the crime families. She’s left it up to lieutenants but this can’t go on much longer. Selina takes out her frustrations on Spoiler/Stephanie Brown, who’s after the same information about Batman. Poor Steph can’t catch a break or so it seems until Catwoman #2 shows up and offers to act as mentor. Sometimes this plotline seems to be going slowly but the climax should be worth it.

Yes, this concerns the “Truth” saga running through the Superman titles, in which he’s been outed (though we don’t know why) by Lois Lane, a storyline I hate. However, there’s no denying the creative talent on some of the titles, including this one, where the low-powered Superman encounters the new protector of Gotham, Jim Gordon/Robot Batman. Things predictably don’t go well, as Gordon is law-and-order and Superman is used to doing, well, what he wants. They both want to protect an artificial sun created accidentally in Gotham (oops!) from outworlder who blames Superman for the death of his world’s previous power source.

There are some nice Superman moments, as he tries to talk to his opponent, and it appears Gordon messes that up because Gordon has learned not to be too trusting of villains out for revenge. I’m not sure who’s right on this one. It’s an intriguing match-up but can we please have this storyline end? I prefer the Superman in the Justice League of America.

Sweet Chic: How To Dress Up Your Everyday Desserts