It’s here again. That time of the year that many of us are frantically making lists for holiday gift giving. If you’re like me and have a slew of older kids on the list, you’re either drawing a blank or trying to decide which bank to rob to make your list happen. One of the top things on my older kids’ lists is electronics. Electronics, at least the quality ones, are expensive.

But have no fear… I have great news for you! Just in time for the holidays, GoPro has heard our cries and has come out with what I like to call a family-friendly GoPro camera. It’s family-friendly in features, but also in price.

In early October, they released two new cameras. One is called the GoPro Hero 4. It’s pretty much a professional camera, made for people who like to set up every shot exactly right and then produce jaw-dropping movies with their footage. It’s a great camera for the true techie on your list. However, it also comes with a pretty high-tech price ($399 to $499).

But, on the same date, they released a camera on the opposite end of the spectrum, called the GoPro Hero. It’s the best of everything, for those of us who want our electronics to be easy, self-explanatory, quality, and affordable. It’s a camera that has all of the quality HD footage you’ve heard about when it comes to GoPro cameras, but only costs $129 bucks.

Oh, did I mention that it fits all the accessories offered by GoPro (chest harnesses, bike mounts, etc.), is waterproof, shockproof, and encased in a shell that even your kids can’t tear up? It lets you shoot 5MP pictures and has a variety of settings for still pictures and video. The low-light mode adjusts for lighting changes, allowing you to take the filming from the birthday cake at the table inside out to the pool party in the bright sun, adjusting as it goes.

I’ve spent some time with some pretty cool GoPro representatives and the more they describe what these cameras can do, even for those of us who are not super comfortable with a lot of settings options, the more confident I am that I too can have great footage of my family. Me, the one who barely knows how to work my cell phone.

One of the goals GoPro had with this new edition was to offer a starter GoPro. They call it their entry-level model. They heard the complaints that those of us in the real world didn’t have time to figure out a zillion settings and didn’t really need all of the extras that their higher-end cameras have. We needed a camera that gave us reliable, quality footage and prints, but required only one touch to use.

This new GoPro has a feature called QuikCapture. Press the button once and the camera turns on and starts filming immediately. Press it and hold it for two seconds to capture photos. No more missing the shot because you didn’t have the camera in the right mode.

Another dummy-proof feature that I love is something called SuperView. The wide angle lens allows you to get much more in the shot, lending itself perfectly to selfies packed with people (and kids!) and more of the action at events like birthday parties and afternoons on the beach or sledding.

If I could peer into the future, I’d imagine that many kids will now grow up with the GoPro Hero entry-level camera, learning how to take great shots and make fun movies to share with their friends. Then, as they hit their teen years and their filming needs bump up in specifications, they will move into the higher-level GoPro cameras, having built up confidence along the way.

While researching this post and brainstorming with the other GeekMom writers, we came up with some more non-traditional uses for your new GoPro Hero. Having trouble with an appliance or vehicle and need to see in a tight spot? Turn on the GoPro and tuck its tiny housing up into that space. I plan to have a camera mounted above the room when my son, who recently returned from his deployment in Afghanistan, is going through pictures he took overseas and telling us stories. It will be a great video keepsake of the stories he’ll want to remember, but will never take the time to write down.  That led me to realize how valuable it would be to do the same thing on Christmas morning. Why not use that amazing wide angle lens and tuck a GoPro in a spot above the action while your kids open their presents and interact with grandparents? That’s some basic video I wish I had from our own childrens’ holiday mornings.

When it comes to using all of this great footage you have, don’t be afraid. I’ve been the delegated movie-maker at our house, as once we come home from the BMX park or ski down off the mountain, none of my teens want to take the time to organize all of the amazing footage we got that day. This is how I came to also fall in love with the movie-making software GoPro introduced last year, called GoPro Studio 2.0.

I’m the picture-taking mom. I’d never played with movie-making software until GoPro Studio 2.0 came along. I had so much footage sitting on hard drives that I had no choice but to dive in and do something with it. It’s a free upload from the GoPro website and it’s so user-friendly, I figured it out the first day. (I highly recommend the great tutorials on the website.)

The first movie I made using GoPro Studio 2.0, having no experience with movie-making programs, was a hodgepodge of my boys and hubby on the ski slopes one weekend. You can find it here.

Then, I kind of got addicted. I decided to document the day we adopted our new kitty, on Mothers Day this year. Here is that link.

Other GeekMom writers tried it out, too. GeekMom Jenny loves her GoPro and sent her young daughter out into the backyard to see the world through a young person’s eyes. Then she and her daughter made a fun video, using the Studio 2.0, of their adventure. Their link is here.

GeekMom Laura’s son took their GoPro camera into breathtaking caverns in the Linville Wilderness in South Carolina. That video is here. They also used their camera for many science experiments, and made a fun time-lapse movie of the weather moving in on their farm.

And to round it out, this summer I suddenly found myself at an amusement park with all of the nephews and nieces on my husband’s side of the family. I pulled out my GoPro, filmed through the day, then strung together a fun movie of our day (in about an hour) that I then shared with each of them. (You can find it here).

Easy to film. Easy to download. Easy to edit. Easy to create. That’s my kind of family-friendly product. Don’t forget to add the GoPro Hero to your holiday gift list. 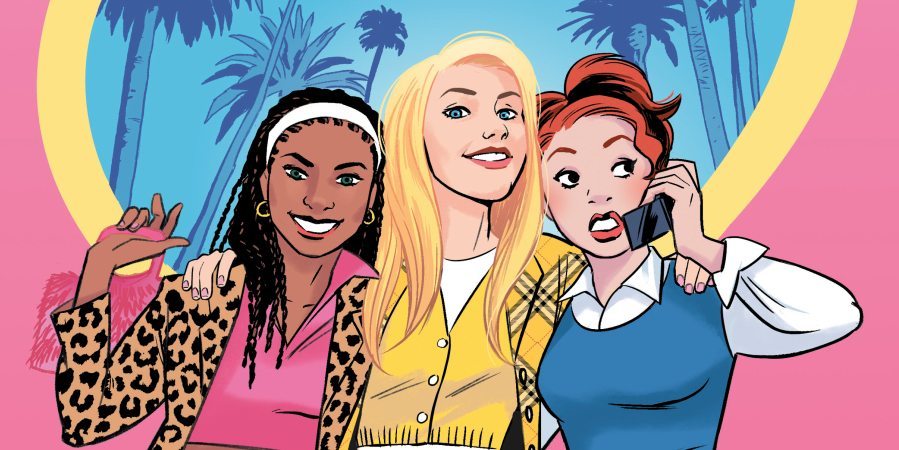 Miss Out on the ‘Clueless’ Comic Book Sequel? As If!

Hook: What we Geeked Out on This Week

2 thoughts on “The Family GoPro Camera Has Finally Arrived!”