The latest Lego-inspired art book from No Starch Press, whose publications include Beautiful Lego and Art of the Brick, seems like an idea that has been needing to happen for sometime: Steampunk Lego by Guy Himber.

Himber is an award-winning Lego builder, who has worked on special make-up effects and animatronics for more than 50 feature films, such as Edward Scissorhands and Stargate. This book is certainly an amalgam of his interests and talents.

“The artists, authors, and filmmakers who work in the Steampunk genre value independence, creativity, and whimsy—which makes Lego a perfect embodiment of the Steampunk philosophy,” Himber explains in the book’s introduction to steampunk. “Lego builders don’t want mass-produced, generic things, but tools from which we can build our own unique ideas and creations.”

To illustrate this point, Himber (aka V&A Steamworks) has compiled great collection of creations by himself and other in the Lego steampunk community.

As indicated in the book’s subtitle, The Illustrated Researches of Various Fantastical Devices by Sir Herbert Jobson with Epistles to the Crown, Her Majesty Queen Victoria, the book is set up as a fictional sampling of some of the innovative inventions of the time. Steampunk culture is never one for over-simplified brevity, and each photo is accompanied by a descriptive narrative or backstory, as well as commentary from Sir Herbert and his cohort, Lt. Penfold

The “Cornwall Cannonball” locomotive engine, for example, is designed to “explode upon impact with enemy railships (or anything else, unfortunately).” This is why its pilot is seated at side of the engine in a tidy little ejection-ready seat.

There are several quotes by historic figures (real and fictional), who seemed to have an edge on all things steampunk long before the term was even coined:

“Science, my lad, is made up of mistakes, but they are mistakes which it is useful to make, because they lead little by to the truth.”  — Jules Verne.

Every section of this book is more creative than the next, ranging from simple little oddities in the “Cabinet of Curiosities,” to elaborate multi-tiered floating worlds and gear-heavy machines and weapons in “Clockwork Beasties,” “Armaments and Sundries” or “Monowheels and Penny-Farthings.” Dave Degobbi’s “Crawler Town” and “Salty Town” mobile communities are exceptionally impressive, as well as V&A Steamworks’s “HMS Verne” and “The Golden Empress.”

Even the names of the devices, such as “Lord Sterling’s Entropic Molecule Disruptor” by Sterling Blunderbusswerks, are stories in themselves.

There is also a heavy Star Wars influence on these works and chapters like “Space!” feature steampunk tributes to some of the best-loved ships from the Star Wars universe. Standouts include the “Bow Tie Fighter” and the “Falcon of the Millennium.”

I love the artisanship in this tome, but Legos being Legos, seeing these creations makes we want to pour out my own bin of toy bricks, sit down with the family, and start building our own airship or mechanical man. It would seem that there would be a market for a companion book or even a section in this book that includes a build-it-yourself pattern or two. Having a design pattern or some building pointers would give me even more reason to want to browse through this book repeatedly.

Since No Starch Press already offers a handful of fun Lego “build-it” and “idea” books, I’m hoping it is only a matter of time until we see a steampunk version in the works.

Until then, there is plenty of inspired works for both kids and adults to enjoy from Steampunk Lego, and definitely plenty of imagination left to go around.

Steampunk Lego will be available for purchase in November. 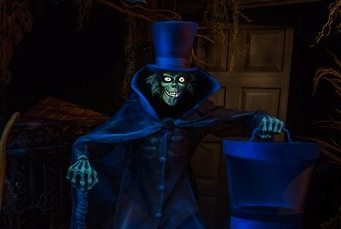 What is it About The Hatbox Ghost?