For years, my eldest son has happily played with his Duplo bricks. We have whiled away many hours building towers, farms, boats, all manner of things. But a few months ago, he became disgruntled with them. There were several contributing factors. Having a little brother playing with them too, having a little brother destroying them, and quite frankly, they just didn’t do what his imagination wanted them to do.

So we moved on with some small packs aimed at 5-7 year olds. These packs came free with a newspaper that his grandparents buy in the UK. There were little pieces, so the first rule set was that they were only to be played with at the kitchen table, where his brother couldn’t reach them. The rule was agreeable to everyone but the little brother in question. 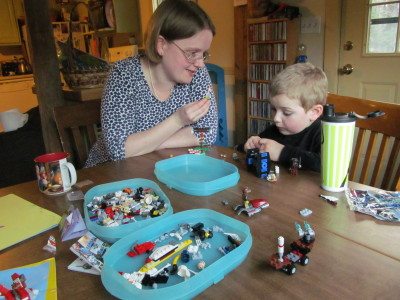 Turns out that for a young four year old who turns five this coming September, the 5-7 age range worked very well. The first half dozen kits were done with some very hands-on help from his dad, but after that he just went with it.

He finds the instructions easy to follow, only has trouble with some of the more peculiar pieces, and thoroughly enjoys the construction process. The second rule we set was that he has to put the pieces together according to the instructions the first time around, and after that he can do what he wants with the pieces. This rule is also one he follows willingly, so we build everything per the instructions, and then he disassembles the kit to come up with his own ideas. He heavily favors cars and rocket ships in his own designs.

Some of the packets we have are for ages 6-12, but there seems to be no difference in difficulty level between the five and six year starting line. So when he finally got to visit the Lego aisle at Toys R Us, we focused mainly on the small six-year-old packs such as Lego Creator 31014 Power Digger and Lego Creator 31015 Emerald Express. Ultimately he chose Lego Creator 31013 Red Thunder which is a pack of three. And again he had no difficulty.

But, oh, he longed for that display Coast Guard helicopter.

When we took him to the Legoland Discovery Center which recently opened in Boston, we agreed that we were going to let him purchase a bigger pack this time. He had proved his mettle and earned it. But once in the store, I felt intimidated by the size of the packs, and the quantity of pieces. I felt certain that my boy would have the skill set for such a piece, but at four years old would lack the patience required for something bigger. So I steered him towards Lego’s new line of mid range Lego kits.

Intended to bridge the gap between Duplo and the more traditional Lego, the Lego Juniors line had intrigued me for a while, and I wondered if this might be what we were looking for. He zeroed in on a kit larger than his usual size, a Teenage Mutant Ninja Turtles kit*, and back home we went.

The clerk in the store explained that the difference between regular kits and the Juniors was in the instructions. The idea is that Lego Juniors instructions are easier to follow than the instructions provided with kits aimed at an older audience. I found this hard to believe, as my son had been following the instructions for a six year old exceptionally well. Putting together the kit was no problem; in fact it was easier than any of the smaller models he had previously constructed.

It was in the deconstruction and imagination aspect that we found the downside of this well meaning product from Lord Business.

What makes Lego Juniors so simple to construct, what makes the instructions so easy to follow, all boils down to the same thing: pre-connected pieces. The base for a car in the Juniors kit is not a collection of pieces; it is one solid piece. There are no angle plates, no bearing elements, there are no rims or tires. For my son, this was and still is extremely frustrating.

Now, when he disassembles the kit to construct from pure imagination, he has less freedom to play. He has fewer pieces, and fewer ways to manipulate his car design. The first time he encountered this problem he tried to bite the wheels off the base, because “they have to come off mommy, they always do.” After a couple of go rounds with this, he gave up trying to take it apart and now simply sighs when encountering that piece. Much like the bulk of his kits, he adapts, but he breathes a heavy sigh as he does so. 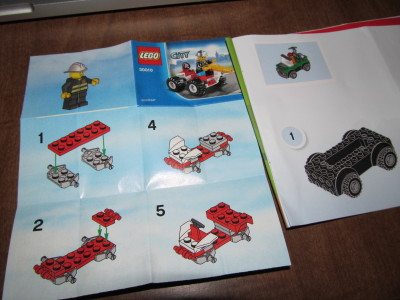 In the example pictured here, the instructions on the left are for a basic car, in a kit for ages 5-12. On the right are the Juniors instructions, ages 4-7. You will notice that step one in the Juniors kit is a complete base, while the base is not complete in the 5-12 kit until the wheels are added in step seven (not pictured).

While I still maintain that my son has the skill set but not the patience for a physically larger kit, I do not think the larger kits designed for the Juniors range are challenging enough for him. They do not keep his interest, and they do not stimulate his own creations either.

But that is not to say that the Juniors line does not have a place in the world of Lego. If you are a parent who has no experience or interest in Lego, but you have a young child who does, this would be a great place to start. Perhaps your child has shown no interest in doing anything but making the pre-determined kit; these kits would not hinder that goal. From a safety perspective I am aware that my son is working with kits beyond the manufacturer’s recommended age group, and so if your child is prone to swallowing small pieces, or has a propensity to get frustrated with bits and pieces, this might be preferable to a five and up kit.

However, if you have already begun your Lego journey with regular kits and had success, the Juniors range is not for you. Likewise, if your child likes to see how things are put together, see how they work, then the limitations of the pre-connected pieces might prove too frustrating and a hindrance to the enjoyment of Lego as a whole. If you have an older Lego addict in your family–in ours it is my husband–that has the time and patience to sit and work through the kit, then the regular kits would be a better group activity.

One of the other pieces of information we garnered on our adventure in the Lego store was that since the advent of licensed products, such as the Star Wars kits and The Lord of the Rings kits, the age ranges on the packages have changed. The criteria for aging is not the same as it was when we were kids.

If a kit is based on a movie that is rated 12 and up, then the kit is not designated under age 12. For example, Lego LOTR79006 The Council of Elrond is a relatively simple kit compared to some of the kits we have been doing for five year olds, and yet it is rated 9 and up. The architecture kits contain many similar pieces and are therefore often quite simple to put together. Yet the finished product is not intended to be a toy, and so the age rating is higher. Certainly the number of pieces, complexity, and size still play a part, but they are not the only determining factors you should consider when picking a kit.

For my young four year old, we shall continue with the kits rated for ages five through twelve, with a few six and ups thrown in. As long as the size of the overall construction can fit in my cereal bowl, it is not too big for him too handle without frustration. There are a wide variety of kits for this young age available, and with some assistance from very willing parents, we will not be purchasing anything else from the Lego Juniors range.

*I am assuming that the Lego Juniors Teenage Mutant Ninja Turtles kit we purchased is a store exclusive, as it is not available in the online store. 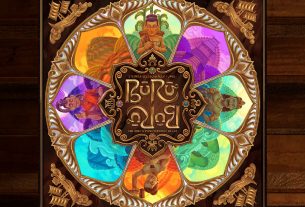 9 thoughts on “Which Lego Set Is Age Appropriate?”