Joss Whedon. If I had to make a shortlist of people who could become the Patron Saint of Geek, he would be at the top of it. These days, his body of work is so broad that you’ll struggle to find a geek who doesn’t love at least some parts of it. From The Avengers to Buffy the Vampire Slayer, through Firefly and Dr. Horrible’s Sing-Along Blog, the sheer range of genres within the Whedonverse is astonishing, although each one features a certain something in their dialogue and overall attitude that make them distinctly Whedon.

Whedon’s work is in fact so highly regarded that it has given rise to it’s own academic group, The Whedon Studies Association. The association hosts biennial conferences—this year’s conference takes place in just a few weeks at the California State University in Sacramento—and also produces its own peer-reviewed journal, Slayage. Slayage is free to access and filled with papers on every aspect of the Whedonverse. The current issue, published this month, is a special double issue focusing only on The Cabin in the Woods, but with titles like “What’s Your Fetish?: The Tortured Economics of Horror Simulacra in The Cabin in the Woods” (Jerry Metz, 2012) and “‘C-can[sic] we rest now?’: Foucault and the Multiple Discursive Subjectivities of Spike” (Andrew F. Herrmann), you can immediately see that this is not light reading. For anyone interested in the concept of Whedon Studies and wanting to delve deeper into the Whedonverse but unwilling or unable to sit down with a full academic essay over lunch, Reading Joss Whedon might just be the book you’re looking for.

Reading Joss Whedon collects together articles that cover all types of Whedon’s work, although there is naturally something of a focus on his television productions. It is arranged into collections, beginning with a set of essays on Buffy the Vampire Slayer, moving through Angel, Firefly/Serenity, and finally, Dollhouse. Collection/part five, “Beyond the Box,” covers Whedon’s non-TV work with four essays on Dr. Horrible (webseries), Buffy’s Season Eight (comic series), The Cabin in the Woods, and The Avengers (films). Each TV series is also given a brief introduction for readers less familiar with them. The final part of the book covers “Overarching Topics” and covers subjects that stretch across multiple Whedon works with essays including “Technology and Magic: Joss Whedon’s Explorations of The Mind” (Jeffrey Bussolini) and “Hot Chicks with Superpowers: The Contested Feminism of Joss Whedon” (Lauren Schultz).

A second table of contents is also provided that groups the essays by subject. This is especially useful to those of us looking to use the book as a reference tome. The subjects used include Human Identity, Gender, Narrative & Writing, and Myth & Intertext. Together, they do an impressive job of summing up what the Whedonverse does best and the questions it repeatedly raises.

One of the things I took away from early in the book was a comparison between Whedon and Shakespeare. The comparison wasn’t discussing talent or output, simply their working practises. Whedon is known for working with a small group of actors repeatedly (Nathan Fillion, Amy Acker, Alexis Denisof, Fran Kranz, etc.) in much the same way that Shakespeare’s plays were usually performed by the same group, The Lord Chamberlain’s/King’s Men. It’s a point hammered home by Whedon’s adaptation of Much Ado About Nothing, a production he has himself referred to as “a love letter—to the cast.”

Another point I found especially interesting was a discussion on the way Whedon’s work often focuses on the concept of “chosen” family rather than family as defined by blood. It’s a recurring theme I hadn’t ever really thought of. The Scoobies in Buffy, the crew of the Serenity, even The Avengers. All are groups who have found their “families,” rather than being born into them. It’s far from being an idea unique to Whedon; the TV shows Supernatural and Warehouse 13, for example, address the concept regularly and somewhat more explicitly, but it’s certainly a recurrent Whedon theme. Even Agents of S.H.I.E.L.D., which premiered too late to have essays included in the book, has drawn on similar themes.

I am not a die-hard Whedonite; rather I have remained on the fringes of his Verse, dipping my toes into almost every one of his creations (to date the only Whedonverse show I haven’t watched is Angel). However, despite not being familiar with every last nuance of the Whedonverse, I found Reading Joss Whedon a deeply insightful collection that not only made me look at the Whedonverse with different eyes, but at other media as well. I especially loved “All Those Apocalypses: Disaster Studies and Community in BTVS and Angel” (Linda J. Jencson), which looked at the ways disaster and survival was presented throughout Buffy the Vampire Slayer. The essay has me thinking in new ways about not only my own fiction, both written and viewed, but the way these subjects are presented by the real-world news media as well. Not being a huge fan, I occasionally had to do a little googling when episode titles were casually thrown in as references (it’s been a few years since I last watched Buffy), but this didn’t detract from my overall understanding or enjoyment.

Reading Joss Whedon is a great book both for Whedonites looking to read more about their favorite verses and for those interested in storytelling and media as a whole. If you’re after something to really stimulate the mind as you lie on a beach this summer, this might just be the book you’re looking for. 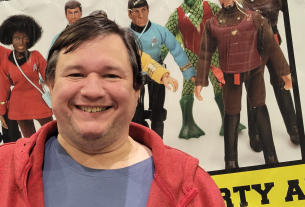