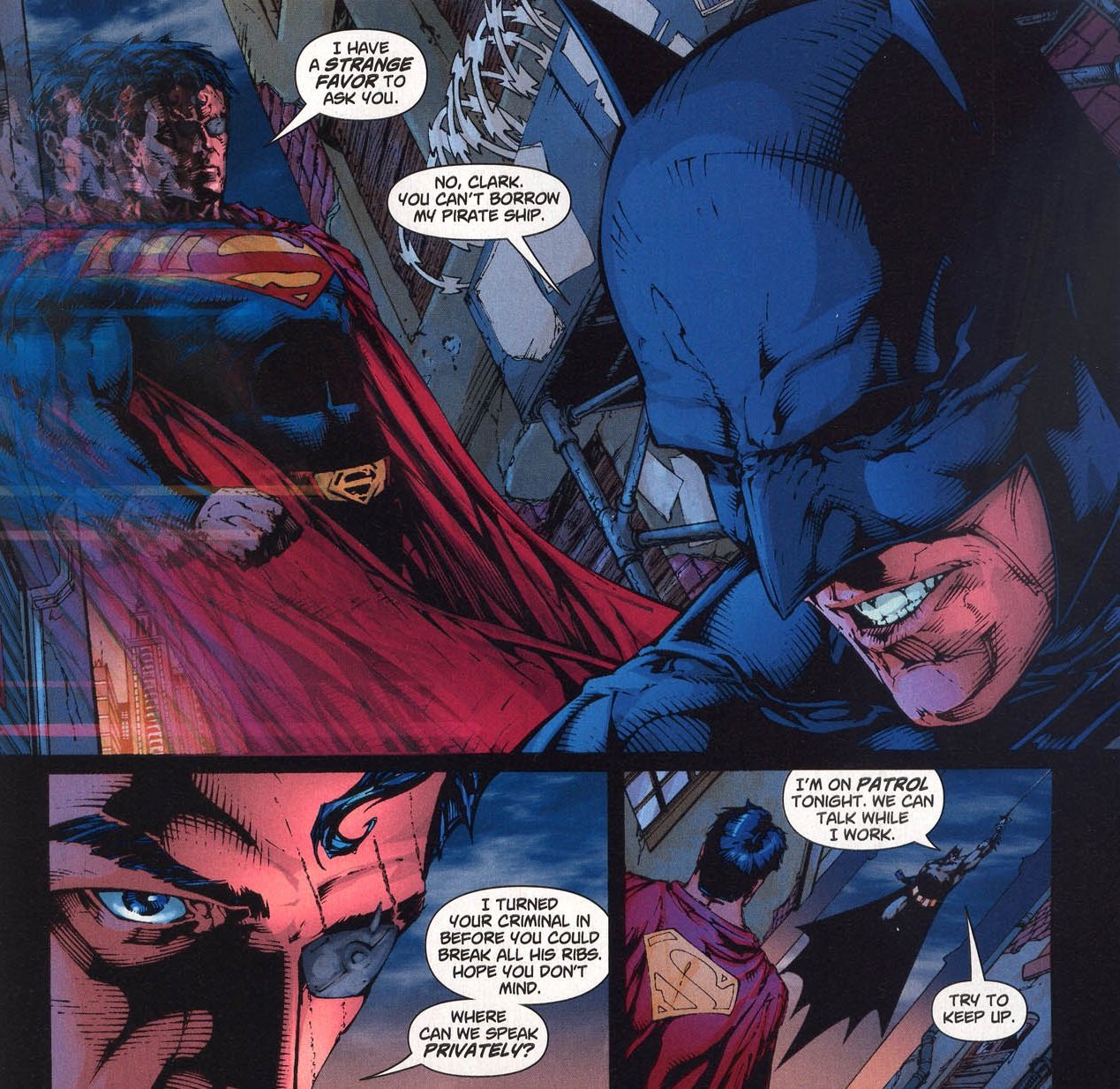 Happy Comic Release Day! Welcome to another installment of GeekMom Comic Book Corner, where we recap our adventures in comics for the week. This week I take a look at Superman/Batman‘s search for Kryptonite, Kelly takes us into the world of Hello Kitty, Corrina gives us a look at some DC Comics titles coming out today, Lisa dives into Disney’s Seekers of the Weird, and Sophie takes a ride on Serenity.

Superman/Batman: The Search for Krypontite was my chosen read last night for #ComicBook365. I’m a big fan of this series, because, quite frankly, Batman gets some of the best lines. It’s an odd thing to find yourself laughing while reading the Dark Knight, but that’s what I found myself doing while reading this title.

Along the way they battle Aquaman, Amanda Waller, and one villain I will leave a mystery. I will say that the mystery villain threw me through a major loop and I wonder how some of my fellow Superman fans would feel about this iconic character being turned into such a heartless disgrace for a human being.

My favorite part was how the story opened and the jokes between Batman and Superman that follow. I’d frame those pages if I had the wall space.

If you’re looking for a story with a nice balance of humor and seriousness, pick up Superman/Batman: The Search for Kryptonite.

Hello Kitty is everywhere. And now, thanks to a team up between Viz Media and Sanrio, Hello Kitty and her friends even have their own series of graphic novels that will delight Hello Kitty fans of any age—even those who can’t read.

Hello Kitty: Delicious! reduced my preschooler to giggles by the time we got to the second page. Even with just a few words for sound effects, the stories are easy to follow and appeal to kids’ sense of humor. Hello Kitty’s adventures take her to another planet, a giant’s home, a night straight out of a spooky movie, and more—and of course, it’s all cute.

Artist Stephanie Buscema, who also worked on several My Little Pony comic book covers for IDW, contributes a few one-page shorts, which are just as adorable as the longer stories in the graphic novel.

All of the experienced artists in the book do a phenomenal job of giving expressions and emotions to the simple Sanrio characters—who have no mouths.

If you’re looking for the first graphic novel for a young girl or Sanrio fan, Hello Kitty: Delicious! is a fantastic place to start.

Lisa Tate — Seekers of the Wierd #1, by Brandon Seifert and Karl Moline

It would seem a Marvel Comic based on the nostalgic origins of a favorite Disneyland attraction complete with the creative guidance of Marvel bigwigs like Joe Quesada and a handful of Disney imagineers would leave no room for disappointment. Unfortunately, Disney’s Kingdoms Seekers of the Weird Issue One does, but only slightly.

Written by Brandon Seifert with the collective art team of pencils by Karl Moline, Rick Magyar as inker, and color by Jean-Francois Beaulieu, the all ages comic was inspired by Disney legend Rolly Crump’s concept designs of the Museum of the Weird, the original walk-through attraction that evolved into Disneyland Park’s Haunted Mansion.

I think where this idea falls a little short is that it strove to get so many tributes to the attraction in the story that it left little room for character building. The story takes place in New Orleans, a great tribute to the setting of the current Haunted Mansion in New Orleans Square, and takes a high-school aged brother and sister Maxwell and Melody Keep on a journey to recover their oddity-loving parents from their would-be captors of reanimated weird taxidermy. Enter the elusive adventure-loving Uncle Roland (another shout-out to Rolly himself) and a mysterious door, which may lead to the answers they seek.

This is a first issue, so I expect to dig a little deeper into Maxwell and Melody’s story, but I would purchase this one based more on the fun game of finding the many references to Crump’s designs. For those who love the art of Disney, especially its treasure chest of concept art, this is a treat. The cover by Michael Del Mundo is fun and quirky, but I recommend the true Disney aficionado get a hold of the variant cover by Crump depicting his concept of the coffin Grandfather clock (although the Brian Crosby steampunk-like variant is also a good choice). Not really a bad first issue, but I expect to see bigger things from it in the follow-up.

Okay..psst…here’s the biggest spoiler of the week: The new Earth-2 Batman who is replacing the dead Earth-2 Bruce Wayne is..Thomas Wayne, his father. This is a good thing.

Of late, I find myself far more interested in this alternate universe maybe because it’s a consistent vision and seems to be far more imaginative in recreating the DC universe than the regular DC Universe. Lois Lane as the new Red Tornado, for instance.

In this flashback story, titled “Origin,” Thomas Wayne survives the infamous shooting in Crime Alley, knows it was his friendship with mobsters behind the tragedy, and sets out to gain revenge. It’s great to see the Earth-2 Bruce, and I like this version of Thomas Wayne as a very broken man who’s screwed up and trying to stay on the straight-and-narrow out of respect for the memory of his son. Special mention to the artists for giving Thomas a very distinctive look.

But I will still pout for a while that, once again, Martha Wayne is just..there. With no personality except to die.

Meanwhile, this annual tackles the adventures of Thomas’ granddaughter, Helena Wayne, and her crimefighter partner, Power Girl. This flashback adventure takes place on their original home, Earth-2, and concerns an early case they investigated as Robin and Supergirl, their Earth-2 identities. The strength of this series is the relationship between the two leads and that’s true here as well, with each showcasing their strengths. At the end, they run into Wonder Woman and her daughter, Fury, who seems to be on the side of evil.

I hope Fury isn’t really Darkseid’s daughter and was just stolen from Wonder Woman as a child because otherwise, ick, ick.

After reading these two annuals back to back, I hope Huntress and Power Girl end up back on Earth-2 soon as I anticipate a fascinating relationship between Thomas and Helena.

This first issue by a new creative team is not nearly as fun as last week’s awesome fill-in but it does represent an excellent jumping on point for new readers. Barry Allen is in full police scientist mode, there’s a new mystery to solve concerning a mass grave that might also involve the real killer of Barry’s mother, and we get to see Flash play with some second-rate Rogues. Note: This Barry is very much in sync with Barry Allen on Arrow, though this one is blond and a little bit older.

Um? What? What the heck is going on here? I’m very much lost. The issue contains lots of Lanterns, Khunds (hey, I know those guys from the Legion of Super-Heroes), Durlans (ditto!), lots of fighting, and numerous flashbacks designed to fill me in, I assume, on who everyone is, but they only stand to make the story more confusing. Also, John Stewart shows up in his boxers. That part isn’t quite so bad.

But overall, for this first time reader, this is a hot mess (perhaps due to the numerous creators?) but I suspect it’s far more readable for long-time fans of the series. And one personal pet peeve: Why do all the skeevy alien/lizard types want naked human women? Just once, I want to see a debauched alien who likes something completely weird and, well, ALIEN.

Finally, an adventure between the original Batman and Robin, Bruce Wayne and Dick Grayson. I was excited when I picked the issue up but oddly deflated when I finished. It’s because the Bruce/Dick relationship is so changed. Before, Bruce was clearly Dick’s father-figure/mentor, and now he’s more like his older brother. It doesn’t sit right with me. Plus, I’m starting to get confused by what happened before DC rebooted and what happened with Batman and his Robins after the reboot. It’s getting so the Bat-Family is just a reboot behind the Legion of Super-Heroes and Hawkman. That’s never good.

But I liked Dick Grayson’s characterization: his sense of fun, and his fearlessness. And more Dick and Damian scenes are always good. One thing confused me: Dick’s original idea for his first costume is very similar to his former Nightwing costume with the light blue on dark blue. But Batman rejects this one because it’s too flashy. So then Dick wears the Robin costume (alas, no pixie boots).

How is the Robin costume less flashy than blue on blue? The mind boggles.

Sophie Brown — Serenity: Leaves on the Wind #1, by Joss Whedon

Firefly is back! It’s the sentence countless people have been waiting to hear and although we’d all rather it was returning to our screens, the new comic series Serenity: Leaves on the Wind will at least be continuing the story.

Issue one picks up after the events of the film Serenity and does not hesitate to leap straight into the ramifications from those events that have now spread across the system (NB, for those of us who have read the Serenity comic released on Free Comic Book Day 2012, that issue appears to fit between the film and this new series). We see the effect that the Miranda revelation had on both Alliance-controlled worlds and in the outlying regions, as well as how the Alliance themselves are dealing with the new threat poised by Mal and his crew.

On board Serenity herself there have been some significant changes.

Relationships have shifted and people have changed since we last saw these characters, but all the progressions feel natural. The new status quo aboard the ship feels like it is where we would have naturally found ourselves if the TV show had been allowed to continued, and with Zack Whedon on writer duties we can probably be assured that this is the case.

Every character feels accurate, if not in the artwork which feels a little off for certain individuals (Mal especially) but in their speech. The issue also strikes a nice balance between action and downtime, humor and heartbreaking emotion–the latter rearing its head as Zoe prepares for bed. We also get our first ever glimpse of Ma Cobb, and she appears to be knitting something rather spectacular!

Serenity: Leaves on The Wind is currently only a six-part miniseries but it has the potential to become another ongoing Whedonverse franchise ala Buffy and Angel. If issue one sets the quality level for the rest of this series, then I really hope the series gets picked up, because I for one need more of these wonderful people. It’s time for some more thrilling heroics!